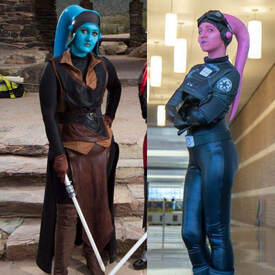 Thermocosplay is a two-person cosplay team that started in summer of 2014. We aim to educate, communicate and share with others our knowledge and love of cosplay. We have hosted panels across the Southwest on Cosplay, Anime, Pop Culture Trends and SFX DIY. We are award-winning cosplayers who enjoy the creativity that cosplay promotes. We are excited to join LIBCON West 2019 as presenters and cosplayers!